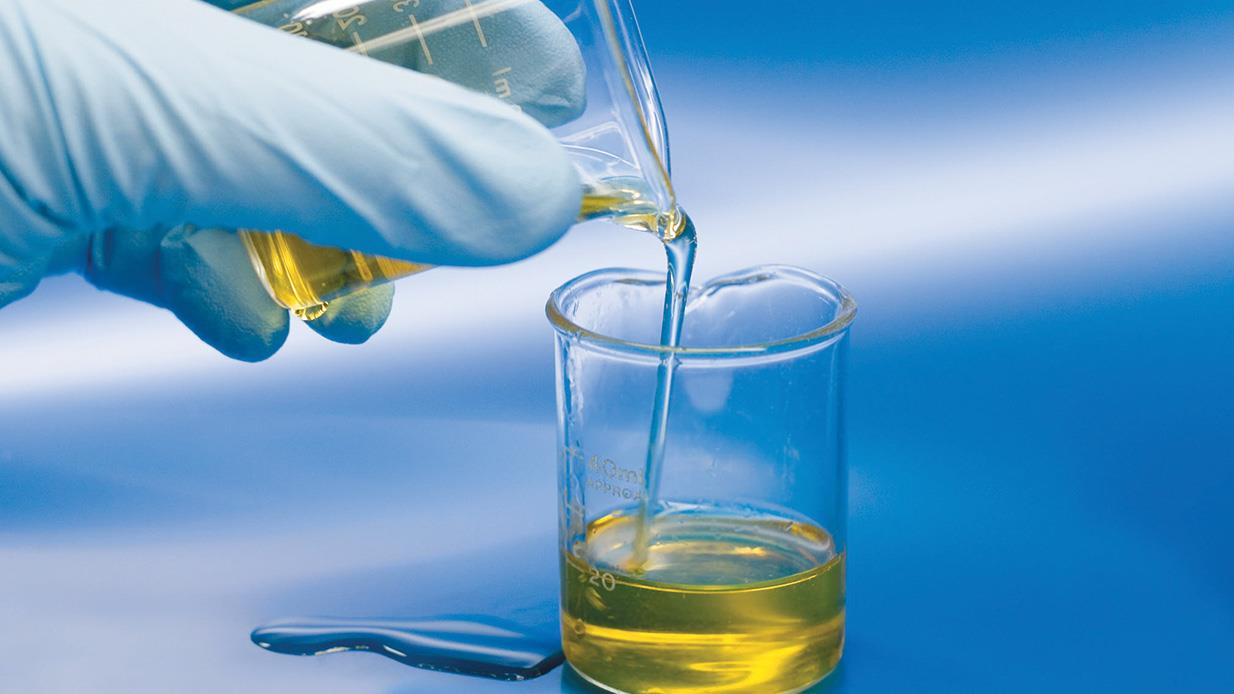 What is Kinematic Viscosity?

Kinematic viscosity is a measure of a fluid's internal resistance to flow under gravitational forces. It is determined by measuring the time in seconds, required for a fixed volume of fluid to flow a known distance by gravity through a capillary within a calibrated viscometer at a closely controlled temperature.

This value is converted to standard units such as centistokes (cSt) or square millimeters per second. Viscosity reporting is only valid when the temperature at which the test was conducted also is reported - for example 23 cSt at 40 degrees C.

Of all the tests employed for used oil analysis, none provides better test repeatability or consistency than viscosity. Likewise, there is no property more critical to effective component lubrication than base oil viscosity. However, there is more to viscosity than meets the eye. Viscosity can be measured and reported as dynamic (absolute) viscosity or as kinematic viscosity. The two are easily confused, but are significantly different.

Given the importance of viscosity analysis coupled with the increasing popularity of onsite oil analysis instruments used to screen and supplement offsite laboratory oil analysis, it is essential that oil analysts understand the difference between dynamic and kinematic viscosity measurements.

Kinematic viscosity is measured by noting the time it takes oil to travel through the orifice of a capillary under the force of gravity (Figure 1). The orifice of the kinematic viscometer tube produces a fixed resistance to flow. Different sized capillaries are available to support fluids of varying viscosity.

The time taken for the fluid to flow through the capillary tube can be converted to a kinematic viscosity using a simple calibration constant provided for each tube. The dominant procedure for performing kinematic viscosity measurements is ASTM D445, often modified in the used oil analysis lab to save time and make the test measurement more efficient.

Dynamic viscosity is measured as the resistance to flow when an external and controlled force (pump, pressurized air, etc.) forces oil through a capillary (ASTM D4624), or a body is forced through the fluid by an external and controlled force such as a spindle driven by a motor. In either case, the resistance to flow (or shear) as a function of the input force is measured, which reflects the internal resistance of the sample to the applied force, or its dynamic viscosity.

There are several types and embodiments of absolute viscometers. The Brookfield rotary method pictured in Figure 2 is the most common. Absolute viscosity measurement has been used for research applications, quality control and grease analysis within the field of machinery lubrication.

Generally speaking, kinematic viscosity (cSt) relates to absolute viscosity (cP) as a function of the fluid’s specific gravity (SG) according to the equations in figure 3.

As simple and elegant as these equations look, they hold true only for so-called Newtonian fluids. In addition, the specific gravity of the fluid must remain constant during the trending period. Neither of these conditions can be assumed constant in used oil analysis, so the analyst must be aware of the conditions under which variance can occur.

A Newtonian fluid is a fluid that maintains constant viscosity across all shear rates (shear stress varies linearly with shear rate). These fluids are called Newtonian because they follow the original formula established by Sir Isaac Newton in his Law of Fluid Mechanics. Some fluids, however, don’t behave this way. In general, they are called non-Newtonian fluids. Newtonian fluids include gases, water, oil, gasoline and alcohol. Imagine you have two jars before you - one filled with mayonnaise, the other filled with honey. With both jars affixed to the table’s surface with Velcro, imagine yourself dipping identical butter knives into each of the fluids at the same angle and to the same depth. Imagine stirring the two fluids by turning the knives at the same rpm while keeping the same angle of attack.

Which fluid is more viscous, honey or mayonnaise? If you said mayonnaise, you are correct … at least partially. Likewise, if you said honey you are partially correct. The reason for the apparent anomaly is that when rotating the knife in both substances, the shear rate varies, while turning each jar on its side is simply measuring the static resistance to flow.

For example, the viscosity of grease is never reported, rather the grease’s apparent viscosity is reported in centipoises (cP). (Note: the viscosity may be reported for the base oil used to make the grease, but not of the finished product.)

Generally speaking, a fluid is non-Newtonian if it is comprised of one substance suspended (but not chemically dissolved) in a host fluid. For this to happen, there are two basic categories, emulsions and colloidal suspensions. An emulsion is the stable physical coexistence of two immiscible fluids. Mayonnaise is a common non-Newtonian fluid, comprised of eggs emulsified into oil, the host fluid. Because mayonnaise is non-Newtonian, its viscosity yields with applied force, making it easy to spread.

Because the paint is non-Newtonian, its viscosity yields under the force of the brush, but returns when the brush is taken away. As a result, paint spreads with relative ease, but doesn’t leave brush marks and doesn’t run.

The dynamic viscosity determines the film thickness provided by the oil. Kinematic viscosity is merely a convenient attempt to estimate the degree of film thickness the oil can provide, but has less significance if the oil is non-Newtonian.

Many lubricant formulations and conditions will produce a non-Newtonian fluid, including:

If one were to measure the absolute viscosity of one of these commonly encountered emulsions or colloids described above with a variable shear rate absolute viscometer (for example, ASTM D4741), the measurement would decrease as the shear rate increases, up to a point of stabilization.

Look at the equations in Figure 3 again. The absolute and kinematic viscosities of a Newtonian fluid are related as a function of the fluid’s specific gravity. Consider the apparatus in Figure 1, the bulb that contains the sample oil, which is released when the vacuum is eliminated, then produces a head of pressure that drives the oil through the capillary tube.

Can one assume that all fluids will produce the same head of pressure? No, the pressure is a function of the fluid’s specific gravity, or weight relative to the weight of an identical volume of water. Most hydrocarbon-based lubricating oils have a specific gravity of 0.85 to 0.90. However, this can change over time as the oil degrades or becomes contaminated (glycol, water and wear metals for example), which produces a differential between absolute and kinematic viscosity measurements.

Consider the data presented in Table 2. Each of the new oil scenarios is identical, and in both instances the absolute viscosity increases by 10 percent, usually the condemning limit for a change in viscosity. In scenario A, the modest change in specific gravity results in a slight differential between measured absolute viscosity and kinematic viscosity.

This differential could slightly delay the sounding of the oil change alarm, but wouldn’t cause much of an error. However, in scenario B, the differential is much greater. Here, the specific gravity increases significantly, which results in a measured increase of 1.5 percent in kinematic viscosity, versus a 10 percent increase as measured with an absolute viscometer.

This is a significant difference that could lead the analyst to identify the situation as nonreportable. The error that has been made is the assumption in both scenarios that the fluids remain Newtonian.

Due to the many possibilities of forming non-Newtonian fluids, the true parameter of interest for the oil analyst and lube tech should be absolute viscosity. It is what determines the fluid’s film thickness and the degree to which component surfaces are protected. In the interest of economy, simplicity and the fact that new lubricant test procedures are commonly borrowed for used oil analysis, the kinematic viscosity of the oil is the measured parameter used for trending and making lube management decisions. However, in certain cases this may be introducing needless errors in determining the viscosity of an oil.

One can draw the following conclusions from this discussion about viscosity measurement:

Viscosity is a critical fluid property, and viscosity monitoring is essential to oil analysis. Dynamic and kinematic viscosity measurement techniques can produce very different results when testing used oils. Be sure the ins and outs of viscosity measurement and viscous fluid behavior are understood so accurate lubrication decisions can be made.