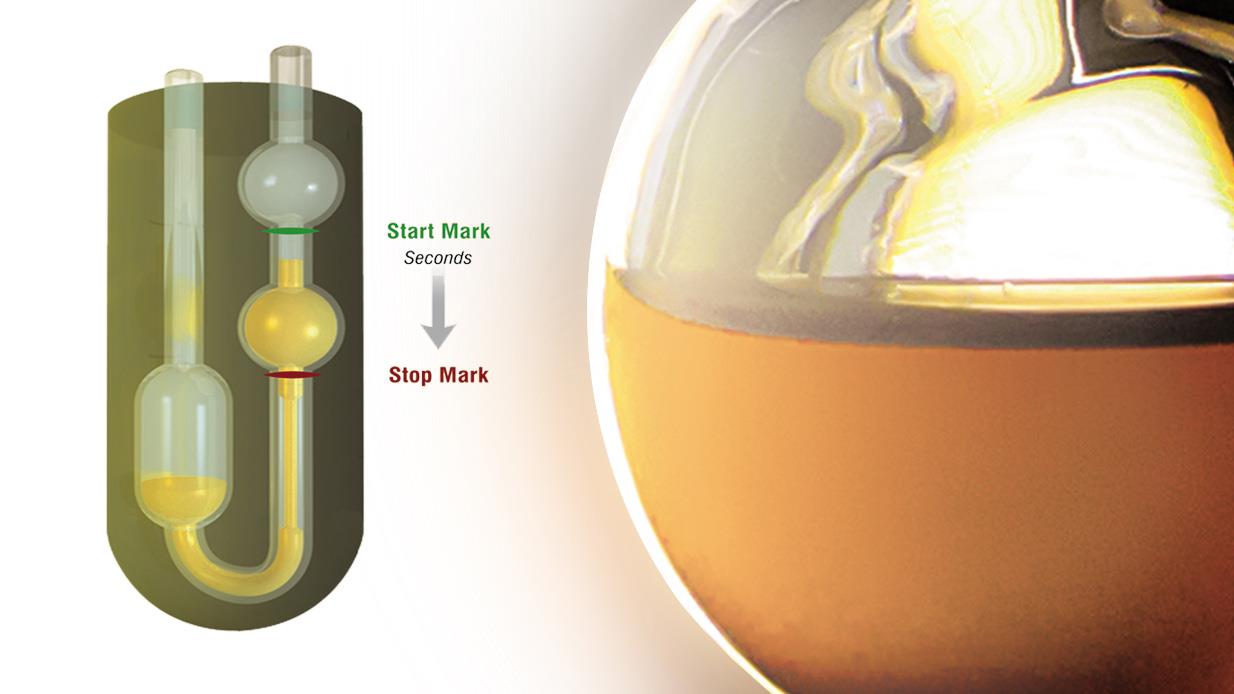 A viscometer is an instrument used to measure fluid viscosity and the flow properties of liquids. Let's discuss the various styles of viscometers, their internal characteristics and factors that go into performing a precise and repeatable viscosity measurement.

In tribology and the study of lubrication, viscosity has often been referred to as the most important characteristic of a base oil. Why is viscosity so important in the lubrication of a machine? For one, too low of a viscosity would allow interfacial contact between internal components in motion to generate wear.

On the other hand, too high of a viscosity would force the machine to work harder to overcome the lubricant’s internal resistance to flow. For this reason, it is important to understand not only the viscosity of the base oil but also how it may change due to fluctuating operating or environmental conditions. The main apparatus used in a capillary viscometer test is a glass tube in the general shape of a “U,” which gives it its commonly associated name, the U-tube. The procedure for a U-tube requires the tube to be submerged in a temperature-controlled bath (usually 40 or 100 degrees C) and a precise time reading (in seconds) for the time it takes a fixed amount of fluid to flow within the tube from one marked point to another by suction or through the force of gravity.

This measured time is then multiplied by a constant (associated to the particular tube) to calculate the absolute viscosity (suction) or the kinematic viscosity (force of gravity).

The key characteristic of a rotational viscometer involves a rotating apparatus, which is referred to as the spindle, being submerged within the test fluid. The torque on the rotating shaft is then used to measure the fluid’s resistance to flow.

Since this measurement does not involve the force of gravity but rather a function of the fluid’s internal shear stress, the rotational viscometer calculates the fluid’s absolute viscosity. A common variation of this type of viscometer is called the Brookfield viscometer. An enhanced variation of the rotational viscometer is the Stabinger viscometer. It uses a modified standalone floating spindle that is controlled by electromagnetic forces to generate rotation within the fluid. This is advantageous because it eliminates the difficult task of factoring in the bearing friction of an attached motor to the spindle.

Less common alternatives for measuring viscosity include the falling ball and falling piston viscometers. In these tests, a ball or piston is allowed to fall into the liquid, and the time is measured between the passing from one marked point to a second marked point. In order to calculate the viscosity in accordance with Stokes’ law, the known terminal velocity, size and density of the ball or piston must be known.

In some cases uncommon in oil viscosity testing, a bubble method may be used. This test generally involves measuring the time it takes for a bubble to rise a specific distance. This measured time can then be proportionally associated to the fluid’s viscosity. Another variation includes measuring the resistance to vibration from a probe.

Although there are several methods by which viscosity can be determined, most viscometers are commercially sold to best fit their intended use. Below is a list of these viscometer categories.

As the name implies, portable viscometers are intended for use anywhere a laboratory setting is not practical. In many onsite and in-the-field applications, viscometers are needed to provide quick, approximate viscosity readings usually for the purpose of warranting further analysis.

For more accurate viscosity readings, small onsite viscometers are marketed for laboratory settings but at a reasonable price. Such viscometers include those of the U-tube varieties or the Brookfield. While there are several variations of the U-tube viscometer, three of the most well-known are the Ostwald, Cannon-Fenske and Ubbelohde.

In order to obtain the highest degree of accuracy in viscosity testing, a full-service viscometer must be employed. These units typically have the capability to automatically test kinematic and absolute viscosity in a wide range of temperatures as well as provide density and specific gravity calculations. One common challenge oil analysis laboratories face with samples requiring multiple tests is the ability to perform these tests with as little sample as possible.

While most oil viscosity testing is conducted after the acquisition of a contained sample, some viscometers can provide viscosity readings continuously in active flow lines. This usually is accomplished by means of a sensor or transducer that is directly inline (part of the pipeline) or online (bypass stream or transducer). Viscosity measurements are taken and then sent electronically as signals to a computer or additional monitoring device. Although the viscosity of a fluid may appear simple to analyze, performing precise measurements on such fluids can be a difficult task. Several factors must be known and kept constant in order for a measurement to be effective, including the following:

Capillary viscometers not only depend on temperature for accuracy but also on the precise inside diameter within the tube. For this reason, these glass tubes are formed with a fully annealed, low-expansion borosilicate glass and often come with the tube’s associated viscometer constant as the correction factor. Recalibrating the viscometer’s constant on a yearly basis and in accordance to the temperature at which it will be used is common practice to ensure as little error as possible. Calibration methods are specified in ASTM D446.

Viscometers vary in size due to a wide variety of viscosities that may be tested. It is recommended that a viscometer take at least 200 seconds (for manual measurements using a stopwatch) for the test fluid to pass from one marked point to the other in order to avoid human error.

Another crucial viscometer test factor is the quality of the rinse within the tube between measurements. Typically, cleaning, rinsing and drying stages are performed using various residue-free solvents. In laboratories where samples are run continuously on high-volume viscometers, built-in cleaning systems ensure cleanliness efficiency. Nevertheless, a visual check is still required to determine if a second rinse cycle is necessary, especially for used oils.

Other important factors that can affect viscosity measurements include the timing device’s method and accuracy, proper sample handling, and in-depth and continuous quality control.

Taking viscosity measurements has evolved over the years with various styles and methodologies. To the credit of ASTM and the International Organization for Standardization (ISO), viscometer testing methods, procedures, calibration, cleaning and other factors have evolved as well to ensure accuracy and consistency among the different viscometers.

After all, with viscosity being the most important physical property of a base oil, the efforts to perform viscosity measurements through careful methods and stringent standards can equate to more reliable machinery lubrication and ultimately to longer lasting machinery.