Is Your Oil Analysis Program Ready to Retire? 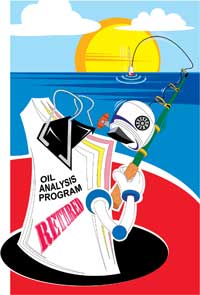 In my Perspective column in the January-February issue of Practicing Oil Analysis magazine, I discussed a situation in which an externally contracted oil analysis program was halted when the new maintenance manager decided the program was nothing more than an ineffective use of his maintenance budget.

This previous column was an example of how even the most successful oil analysis programs can fail under mismanagement.

Sadly, this occurs when those responsible for such programs are misinformed of the significant capabilities of an independent oil analysis program and the overwhelming potential of an oil analysis program that is fully integrated with other predictive technologies and tied into core maintenance, reliability and production goals.

On several occasions, while evaluating and benchmarking oil analysis programs, it is evident that the majority of individuals responsible for the deployment and operation of these program are misinformed, often through no fault of their own.

In my experience, I have seen two kinds of oil analysis programs. The first is a plant-wide or corporate-wide initiative to reduce reactive maintenance, increase mechanical reliability and facilitate root cause analysis. In this class, the goals and desired benefits are recognized, discussed, evaluated and celebrated throughout the plant. Education, information and awareness fuel this type of program.

The second kind of oil analysis program is common. This class of program, like the first, can be plant-wide or corporate-wide. It can be initiated from the top down or the bottom up, with similar results. The core difference between the two programs is that the programs in this second category often look and feel forced; forced down upon the individual plant from the corporate or parent company, or pushed up from the maintenance personnel to the plant manager. In both cases, someone has given in.

Like most extra curricular projects in maintenance, oil analysis programs tend to start off small. Perhaps the lube supplier is taking a few samples each month for complimentary testing. Maybe you are sampling a few of your most critical systems to determine if an oil change is necessary during the next scheduled shut down.

Regardless of the size of your oil analysis program, it is important to have a champion to own and drive the program to success. The choice for a leader has a direct relationship to the overall success and life of the program. In this second kind of oil analysis program scenario, there is often a dilemma as to who shall be the one to ride out this temporary assignment. Aside from the lack of understanding, this is usually where the program is set up for failure.

Choosing a program facilitator or champion must reflect the goals of the program, and not simply satisfy a political placement. If the goals of the oil analysis program are not clearly defined, this oversight is often reflected in the chosen facilitator. Selecting a facilitator usually follows one of a few narrow paths.

One of these paths is the political scenario: The new position must be posted internally and the job often goes to the one with the most seniority. Another more desirable scenario allows the plant or maintenance manager the flexibility to appoint the person for the job.

This is where the uninformed plant or maintenance manager can make or break the oil analysis program. When appointing a champion for an oil analysis program, it is important that the candidate have a thorough knowledge of all lubricated equipment within the plant. This person must also be able to learn quickly and adapt what he or she has learned in the field.

He must have a mechanical aptitude and understand lubricant functions. The best mechanic or journeyman in the department is often perfect for this leadership role, but is unlikely to be pulled from regular maintenance duties to participate in such a program.

Because this class of oil analysis program is not regarded as integral to the overall reliability of the plant’s assets, it is considered a low-stress, low-activity role - perfect for the employee riding out his last couple of years until retirement. This program leader is often perceived as the best choice for the position.

Little progress is made over several months because the lube analyst is still working in other areas of the maintenance department, and selling concepts to management is a difficult pursuit. Several months later after thousands of dollars have been invested, the program has not proven effective at increasing equipment reliability, and at best, has dictated only a few condition-based oil changes.

Then the long-awaited day before retirement finally arrives. Not only is the deserving employee ready to spend the rest of his days in an easy chair, so is the oil analysis program he worked on for the last several months of his employment.

Facilitating an oil analysis program that involves only a single lube analyst can have disappointing consequences: that all the information he or she has acquired over the years is not captured, applied and passed on to successors. This holds true for many positions within the maintenance department.

The plan of attack for a world-class oil analysis program can be summed up in three significant steps:

By following these simple steps, you continuously promote the project and keep it in the spotlight. The program will have a much harder time getting lost in the daily activities of the plant and will create the awareness needed to keep it moving forward.