How to Get True Value from Oil Analysis 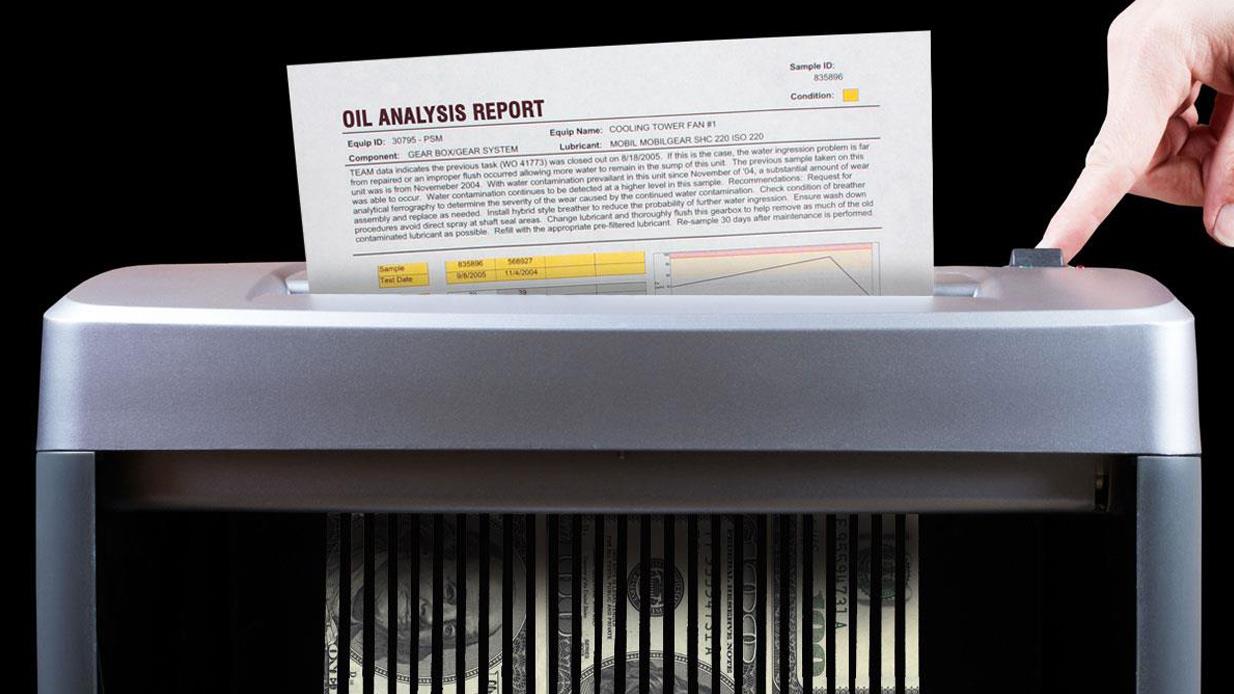 As an active consultant, I spend a considerable amount of time in plants, either on the machine floor or talking with lubrication technicians, supervisors or engineers. One of the first questions I ask is “do you have an oil analysis program?”

Nine times out of ten, the answer is “yes, we take oil samples.” Typically, my next question is “in your estimation, how well is the program working?” Unlike the first question, the usual response is less than positive, ranging from “not very well” to “we initially find problems with vibration analysis.”

So why the disparity between the two replies? Presumably, the decision to implement an oil analysis program is driven by a desire and belief that oil analysis can make a difference, but in reality, experience proves otherwise. Were we misguided in our valuation of oil analysis, or is there something we’re missing?

I previously worked for a commercial oil analysis lab. While visiting clients during this time, one particular meeting comes to mind when the value of oil analysis is questioned. The meeting involved a maintenance manager at a lumber mill.

My mission was to discover why the number of samples being sent to the lab had declined over the years, having been reduced to only a few each month.

I habitually started the meeting by asking how the program was going, and what value the maintenance manager felt it was providing. While the gentleman was not trying to be confrontational, his response - “we don’t get any value; in fact, we have stopped sampling all together” - was shocking to one employee, who at the time had dedicated his career to providing value through oil analysis.

To probe a little deeper, I requested he help me understand what brought him to this conclusion. After all, at some point he had presumably believed in oil analysis enough to have established a program.

In an attempt to explain his views, he cited an example of a series of hydraulic pump failures on one hydraulic unit and took me to the production floor to view the system in question. On the way, he revealed this system was critical to production and any downtime meant the mill was losing production time.

Furthermore, he explained that as a result of four failures in the past 18 months, close to $500,000 had been lost in downtime, and despite monthly oil samples, not once had the problem been found in time.

Upon arriving at this particular system, I carefully examined the layout. Because the unit was supplying high-pressure hydraulic fluid to multiple actuators (rams and motors), the system had a large, 5,000-gallon reservoir and four variable volume piston pumps.

Like most major hydraulic units, the system was equipped with large supply line filters with high-end elements rated at b3=1,000, and a high- pressure return line filter rated at b1=1,000. The engineer pointed out that in the past 18 months, each of the pumps had failed, and the underlying root cause had not been identified.

Our attention then turned to oil analysis. I first asked the maintenance manager where they procured their samples. Unable to answer my question, he called over a mechanic who demonstrated how he removed the reservoir breather and inserted a plastic tube attached to a vacuum sampling gun to extract the oil sample from the tank. At this point, I’d seen enough.

We exited to a private location where I sketched the configuration of this system, including reservoir, pumps, actuators and filters. We then discussed the effectiveness of the filters in removing small particles, and how the oil analysis data will be affected.

Finally, his eyes widened when I explained that in order for the oil samples to show any evidence of pump failure, debris from the pump would have to travel through the three-micron supply line filters, through the valve blocks and actuators, pass the one-micron return line filter and appear in the 5,000-gallon reservoir in sufficient concentration to be detected in the lab. To summarize, he had two chances of finding the problem: slim to none!

We then discussed the reasons these pumps were failing. He explained that by the time the pump had failed and was removed from service, components were so “chewed-up” that no decent conclusion could be reached.

Opinions ranged from cavitation caused by poor air detrainment in the oil to particle-induced abrasion or inadequate oil viscosity at operating temperatures. It seemed that everyone had an opinion, but nobody had an answer.

Rather than testing for elemental analysis, viscosity and water, the tests should include particle counting on each sample that search for larger particles “missed” by ICP due to the three-micron size limitation of the test, primarily in an attempt to identify the beginning of a pump failure, and if possible, isolate the pump in distress.

Furthermore, if a high particle count was observed, a microscopic filtergram analysis should be conducted to view particle morphology (color, shape, structure, size, etc.) to evaluate the root cause.

Finally, I suggested the viscosity should be tested on one of the samples at two different temperatures; therefore the viscosity index of the in-service fluid could be calculated and used to extrapolate and determine the viscosity of the fluid at operating temperatures. Foam and air release tests should also be run and compared to a new oil sample in an attempt to ascertain if aeration was the route cause of the problem.

In summary, the program was now targeted to address a specific goal: identify incipient pump wear before it caused catastrophic failure and unscheduled downtime, and try to determine the underlying root cause so the problem may finally be fixed.

Unfortunately, I moved on to a new position before learning if my recommendations were implemented, but I feel confident that if adopted, the prescribed course of action would have given this plant the best chance to finding and correcting the problem.

If used correctly, oil analysis can be a valuable predictive and proactive diagnostics tool. If used incorrectly, it can be a frustrating exercise in futility.