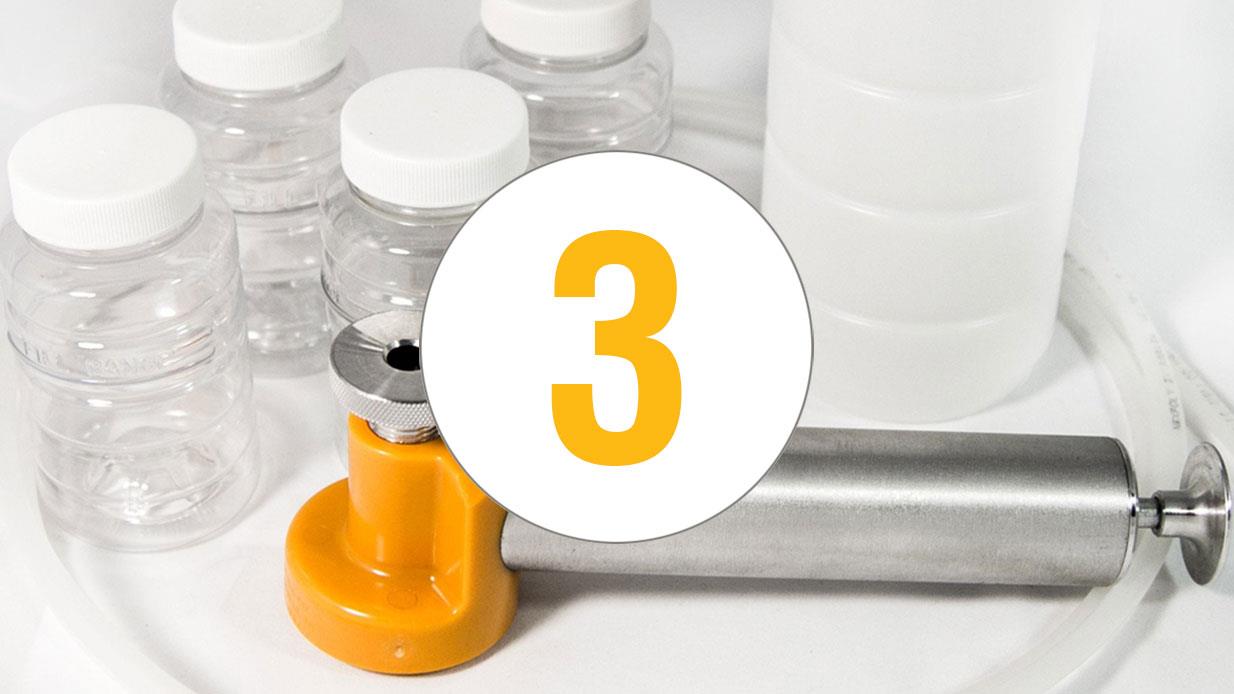 Three sampling procedures commonly associated with engine oil sampling include: sampling a pressurized line before the system filter; using a drop tube in the dipstick tube; and procuring a sample midstream from a drain port while draining the engine.

Through the use of a pump, the lubricant is drawn from the sump and pushed through a filter, where it is then delivered to the required lubrication points. The goal is to install sampling hardware in the live zone at a turbulent point located past the pump and before the filter.

When sampling is required, the hardware is utilized while the system is in operation creating a representative, repeatable sample. Installing sampling hardware is beneficial to maintaining a closed system whereby the sample can be extracted without opening the system and compromising its cleanliness from exterior elements.

Drop tube sampling is synonymous with used oil analysis. Unfortunately, many inconsistencies and fundamental flaws have been associated with this method. Drop-tube vacuum sampling is a simple, low-cost solution to procuring a sample for oil analysis.

However, many factors should be considered before using this method. For instance, to draw a sample the machine must be opened, therefore the oil is exposed to the environment. Opening a machine potentially allows airborne contamination to enter the oil and cause damage.

The key to an effective oil analysis program is the ability to draw an oil sample from a specific location while the machine is in operation and under normal load. Unfortunately, using the drop tube method while the system is running poses several concerns.

For instance, the plastic tubing may be pulled into the system resulting in safety concerns for the individual collecting the sample. This method also requires a large fluid flushing volume; has difficulties in obtaining consistent samples from the same location; and has problems with sampling high-viscosity fluids. In other words, this method of sampling should be avoided whenever possible.

Theoretically, when using this method in conjunction with a dipstick tube, the location will always be in the same general vicinity. The existing variable is the depth that the tube is inserted into the volume of oil in the sump.

To help address the issue of tube depth, a premeasured or graduated sample tube should be inserted to a known depth, which will narrow down the termination point of the tube to a reasonable area of variable location.

Another common sampling method involves capturing a sample of oil as it drains from the sump. The theory is that by capturing the sample midstream, after purging a large volume of oil (40 to 50 percent) from the sump prior to filling the sample bottle, the sample taken more closely resembles a sample representative of the system.

One problem associated with this engine oil sampling procedure is the difficulty of extracting the sample. A special accessory has been adapted to make this procedure easier, cleaner and more reliable (Figure 3).

The drain sample kit uses a small cylindrical oil container approximately five inches in diameter that contains enough volume to hold the contents of the oil sump. A special bracket is then used to hang off the rim of the container to hold the sample bottle in the center.

Once the sample bottle is full, the container is once again repositioned to allow the remainder of the oil in the sump to drain into the container.

Although this system allows for cleaner sampling when taking a midstream sample, be cautious of data from samples taken from a drain port. This is due to the fact that bottom sediment, debris and particles (including water) enter the bottle in concentrations that are not representative of what is experienced near or around the area where the oil lubricates the machine components.

In addition, this method is performed when the oil is being replaced with new oil. This does not apply to trending the in-service oil under normal operating conditions. The drain plug sampling method should be avoided if at all possible.

There are always various methods and associated variables with every engine oil sampling procedure. To be successful, it is necessary to understand the limitations and variability of each procedure and assume the appropriate amount of accuracy with each.