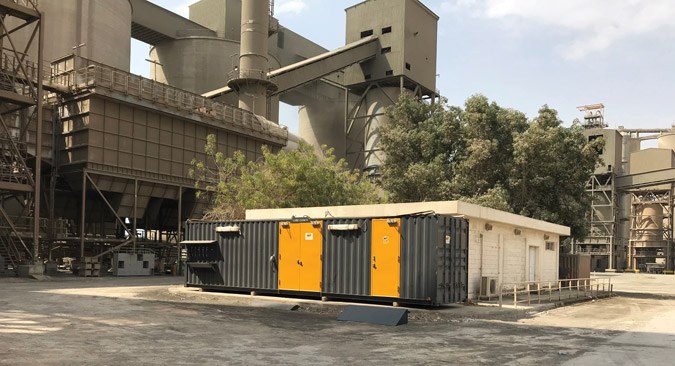 The Yanbu Cement Co. (YCC) is one of the major cement manufacturers in Saudi Arabia with a total installed capacity of more than 7 million tons of clinker and a cement dispatch capacity of more than 10 million tons per year. The company’s lubrication program was piloted by its maintenance crew, which performs lube tasks along with other activities such as overhauling, repairing and replacing damaged parts. The crew’s journey to lubrication excellence would not be easy, as many obstacles were encountered, including high lubricant consumption, leakage and contamination control problems. The following account details how YCC successfully managed its lube program and achieved a 60 percent reduction in lubricant procurement for 2017.

Previously, YCC lubricants were stored in a dust-prone area, and
a single-handle pump was used for different types of lubricants.

The story begins at the end of 2016 when the reins of the lubrication activities at YCC were handed over to a standalone division with a well-defined lube program. Lubrication responsibilities were assigned to specific champions who had been transplanted into the program during its infancy and who held Level I Machine Lubrication Technician and Level I Machine Lubricant Analyst certifications. The company knew that to attain a successful program and the desired results, a solid foundation with highly skilled and trained people would need to be developed. 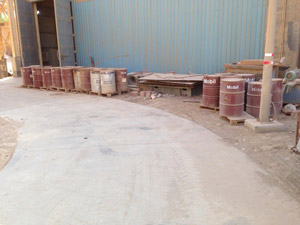 Oil drums were stored along a
pathway and exposed to cement dust and
high atmospheric temperatures. 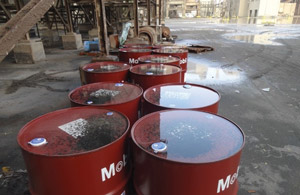 During the rainy session,
water often collected on top of the oil drums. 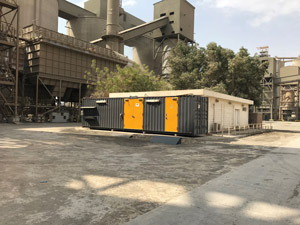 The new centralized lubrication
unit consists of two storage
and handling compartments and
is designed with an external
dispensing station for emergency use
during night shifts.

The goals of the lube program were based on problems that were currently being faced and obstacles that were seen as a barrier to world-class lubrication. A number of practices had to be corrected. For instance, greasing was continued until lubricant was seen spewing out the sides of the bearing. There were also no written procedures for oil changes, sampling or regreasing tasks. The breathers were poor quality and had not been changed since the equipment’s installation. In addition, a single transfer container was used for different types of lubricants.

The program’s goals eventually were defined as being able to perform lubrication tasks at the right time, apply the correct amount of lubricant, carry out lube tasks according to the written procedures, and extend the service life of the lubricant and equipment by improving the quality of the breathers and filters.

Accomplishing these goals would be challenging and would not be done overnight. A long-term plan was created, with completion not expected until 2020. Along the way, the action plans were updated continuously.

The first phase of the plan spanned from 2016 to 2019. As the program progressed, this time frame was extended an additional year. The most important actions of 2017 were to establish a centralized lubrication unit and to purchase dedicated, sealed and color-coded lubricant transfer containers. Establishing key performance indicators (KPIs) was also a priority. For 2018, the main focus was on developing well-written sampling procedures and affixing minimess valves for sampling purposes.

YCC’s cement production line consists of five sections: the crusher, raw mill, kiln, cement mill and packing house. Every section had been managing its lubrication program individually. Each section also had its own lube storage, which resulted in five storage areas in one production line. All these storage areas were located in an open location with no filtration or breather system. Storing lubricant drums in the open area exposed them to cement dust and high atmospheric temperatures, which normally would rise to 131 degrees F during summer. They also utilized a single-handle pump for different types of lubricants. In addition, the lubricant transfer containers and funnels used for top-up tasks and filling small gearboxes with oil incorporated an open design. Employing these types of transfer containers led to the ingression of dust during the filling process. 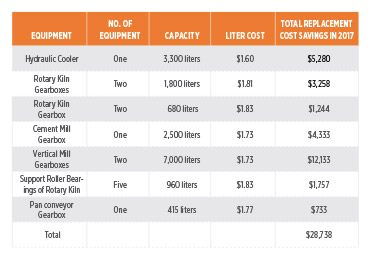 Contributions of the oil analysis
program in maintenance cost
savings for 2017. 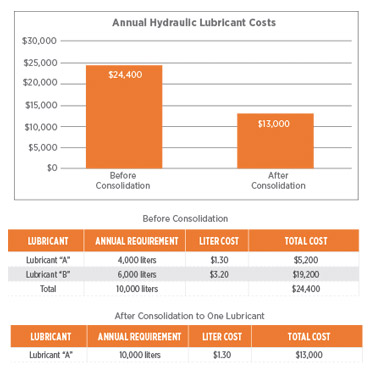 Moving to best practices for lubricant storage and handling was done in two phases. The first phase involved the lube room. Among the most important practices for this room were keeping all lubricant drums in a closed environment with no dust ingression and placing three closed cabinets inside the room for storing oil transfer containers, grease guns and other accessories. YCC invested in color-coded oil transfer containers that were sealable and dedicated to one type of lubricant to minimize cross-contamination and to ensure the filled oil in a component would be clean.

The lubricant identification system (LIS) developed by Noria Corporation was applied with a minor modification to meet Yanbu Cement’s requirement for a color-blind category. The system consists of different sections to indicate the lubricant, product name, viscosity grade and base oil type. Each type of lubricant also has its own color and shape. For example, a red label with a heart is used to identify a VG 320 mineral oil, while black with a clock shape is used to specify a VG 46 hydraulic oil.

The goal of the second phase was to attain lubrication excellence in terms of lubricant storage and handling. A centralized lubrication unit was key to these efforts. The 40-foot container has two internal compartments with no partition between them. The first compartment is a dispensing station with 12 color-coded lines. Each line is equipped with pumps, filters and a desiccant breather. To minimize cross-contamination, each line is assigned to one type of lubricant and color-coded to correspond to the color of the oil transfer container.

There was also room for improvement in the YCC oil analysis program. Preventive maintenance (PM) had been the dominant maintenance strategy. Oil was changed based on the PM schedule regardless of the oil’s condition or whether it was a mineral oil or a synthetic. Typically, the oil was changed once a year. Sixty-six machines were included in the oil analysis program, as they were considered critical equipment in the production process. Criticality was defined by the machine’s impact on the production process.

In 2017, the improved oil analysis program helped to extend the service life of oil in the hydraulic cooler, the cement mill’s main drive gearbox and three kiln gearboxes. The table on page 11 shows the contributions of the oil analysis program in maintenance cost savings for 2017. 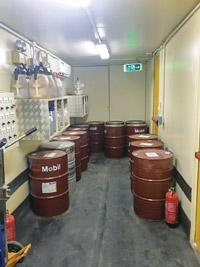 The lubrication unit is equipped
with a trolley for shifting drums.

Yanbu Cement began by conducting an internal audit of select lubricants and their applications. One successful audit was performed on the hydraulic systems of an autoloader in the packing house. An autoloader is a machine designed to automatically load full bags of cement into a truck. The first plant owned eight autoloader machines with 4,000 liters of type “A” oil required annually. The second plant had 12 autoloader machines with 6,000 liters of type “B” lubricant required each year. After studying the machines and consulting with the lubricant supplier and the equipment manufacturer, YCC was able to consolidate down to one lubricant. This consolidation saved the company more than $11,000 in 2018 alone. 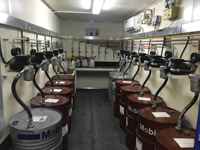 Now, 12 color-coded lines
have a dedicated pump and filter.
Each line also has a flow meter
to indicate the remaining
oil in the drum.

At Yanbu Cement, all hydraulic systems of the autoloader were joined to the oil analysis program after receiving approval from the equipment manufacturer. The results are shown in the tables above. 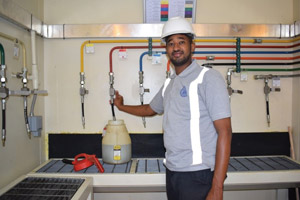 The new dispensing station is equipped with valves,
lubricant identification labels and a dispensing
table which includes a drain valve
for draining oil spillage.

Lubrication tasks throughout most of the Yanbu Cement organization had previously been managed via a spreadsheet. Most departments used a conditional formatting feature to highlight the next tasks due, but the spreadsheet could not determine if there was a shutdown or if all tasks needed to be shifted until after the shutdown was over. Top-ups, which normally were unscheduled tasks, also could not be updated in the spreadsheet. These issues, along with other drawbacks of the spreadsheet, led to an investment in lubrication management software. This new software has helped YCC manage tasks through lube routes and track pending tasks. The software can even provide KPI reports as well as a shutdown task report.

The new dispensing station
is equipped with valves, lubricant
identification labels and a
dispensing table which includes
a drain valve for draining
oil spillage.

Yanbu Cement’s approach for developing a lubrication program was simple to apply and can be accomplished by any organization interested in achieving lubrication excellence. The key is giving the reins to a trained lubrication team and promoting them as champions.