Through the years, lubricant users have been treated to a number of ways to designate viscosity grades of the lubricants used in manufacturing. There are SAE (Society of Automotive Engineers) grades for gear oils and crankcases (engines), AGMA (American Gear Manufacturers Association) grades for gear oils, SUS (Saybolt Universal Seconds), cSt (kinematic viscosity in centistokes), and absolute viscosity.

To add to the confusion, two measures of temperature (Fahrenheit and Celsius) can be applied to most of these, not to mention that viscosity might be presented at either 40°C (104°F) or 100°C (212°F).

While all of these have served useful purposes to one degree or another, most lubrication practitioners settle on and use one method as a basis for selecting products. To the new entrant into the lubrication field, the number of options can be confusing, particularly if the primary lubricant supplier does not associate one of the prominent viscosity systems to the product label.

To complicate matters, machinery designers must define the lubricant viscosity in such a way that the equipment user understands clearly what is needed without having to consult outside advice.

This points to the need for a universally accepted viscosity designation - one that can be used by lubrication practitioners, lubricant suppliers and machinery design engineers simultaneously with minimal confusion.

In 1975, the International Standards Organization (ISO), in unison with American Society for Testing and Materials (ASTM), Society for Tribologists and Lubrication Engineers (STLE), British Standards Institute (BSI), and Deutsches Institute for Normung (DIN) settled upon an approach to minimize the confusion. It is known as the International Standards Organization Viscosity Grade, ISO VG for short. You don’t have to listen very long in this field before someone says that viscosity is the most important physical property of a fluid when determining lubrication requirements.

Viscosity is the measure of the oil’s resistance to flow (shear stress) under certain conditions. To simplify, the oil’s viscosity represents the measure for which the oil wants to stay put when pushed (sheared) by moving mechanical components.

Think of a water-skier cutting through the water. Water has a viscosity measured in centistokes of 1. That is at the bottom of the cSt scale. We can see how much water a professional skier displaces when he runs through a ski course.

If the skier was skiing on a lake of SAE 90/ISO 220 gear oil and all of the other conditions were exactly the same, then the amount of spray generated would be considerably less because the fluid would resist the force of the ski to a much greater degree.

There are two viewpoints of the resistance to flow that the machine designer is interested in. One is the measure of how the fluid behaves under pressure, such as a pressurized hydraulic line. This property is called absolute viscosity (also known as dynamic viscosity) and is measured in centipoises (cP).

On a side note, if you are using in-service oils, it is probably worth measuring the viscosity in absolute units. The measure in centistokes can be misleading because the specific gravity of lubricants changes with age, generally moving up. It is possible to find yourself exceeding an absolute viscosity limit for a machine but still have a kinematic measure that indicates you are OK.

So, viscosity is a measure of the fluid’s resistance to flow. Water has a low viscosity of 1 cSt and honey has a very high viscosity, lets say 1,000 cSt. If a machine is heavily loaded then the machine designer will use a lubricant that resists being pushed around, which would be heavy like honey. If the machine runs very fast then the machine designer will specify a lubricant that can get out of the way, and back into the way just as quickly. Generally, machines will have either one or the other to be concerned about; sometimes both at the same time. 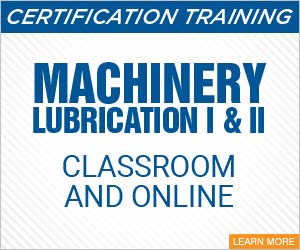 Viscosities are defined or assigned using a laboratory device called a viscometer. For lubricating oils, viscometers tend to operate by gravity rather than pressure. Think of a kinematic viscometer as a long glass tube that holds a volume of oil. The measure of the fluid’s viscosity is the measure of the amount of time that it takes for the designated amount of oil to flow through the tube under very specific conditions.

Because the conditions are repeatable, it is now possible to measure the amount of time that it takes for the fluid to flow through the tube, and it should be nearly the same each time. This is similar to the amount of time it takes a specific volume of fluid at a specific temperature to drain through a funnel. As the fluid gets thicker - a function of its increasing resistance to flow - then it takes progressively longer to move through the tube (funnel). Water goes through in one second. The same amount of honey takes a thousand seconds (hypothetically).

We know that if we raise and lower the temperature of a fluid, there is often a correlating change in the fluid’s resistance to flow. The fluid gets thicker at lower temperatures and it gets thinner at higher temperatures.

Given all of these variables and details, several organizations decided to come up with a way to characterize lubricating oils so that members of their respective organizations would have a uniform and simple way to communicate, educate and ultimately protect their interests.

Purpose of the ISO VG System

The purpose of the ISO system of classifying viscosity grades is to establish a viscosity measurement method so that lubricant suppliers, equipment designers and users will have a common (standardized) basis for designating or selecting industrial liquid lubricants.

Different approaches were thoroughly considered before the ISO Technical Committee (TC23) settled on an approach that is logical and easy to use. There were a few important criteria to keep in mind from the beginning, such as:

The reference temperature for the classification should be reasonably close to average industrial service experience. It should also relate closely to other selected temperatures used to define properties such as viscosity index (VI), which can aid in defining a lubricant.

For the classification to be used directly in engineering design calculations in which the kinematic viscosity of the lubricant is only one of the parameters, it was necessary that the viscosity grade width (range of tolerance) be no more than 10 percent on either side of the nominal value. This would reflect an order of (center point) uncertainty in calculations similar to that imposed by dimensional manufacturing tolerances.

This limitation, coupled with the requirement that the number of viscosity grades should not be too large, led to the adoption of a system with gaps between the viscosity grades.

This classification defines 20 viscosity grades in the range of 2 to 3200 square millimeters per second (1 mm2/s = equals 1 cSt) at 40ºC (104ºF). For petroleum-based liquids, this covers approximately the range from kerosene to cylinder oils.

Each viscosity grade is designated by the nearest whole number to its midpoint kinematic viscosity in mm2/s at 40ºC (104ºF), and a range of +/- 10 percent of this value is permitted. The 20 viscosity grades with the limits appropriate to each are listed in Table 1.

The classification is based on the principle that the midpoint (nominal) kinematic viscosity of each grade should be approximately 50 percent greater than that of the preceding one. The division of each decade into six equal logarithmic steps provides such a system and permits a uniform progression from decade to decade.

Table 2 pulls together some popular viscosity measurement methods into one table. If the practitioner is comfortable with one particular measure but would like to see the correlating viscosity range in another measure, all he must to do is place a straight horizontal line through his chosen viscosity type and see its correlation within the other types of measures.

While it is true that some viscosity grades will be left out of the mix as companies move toward adopting the ISO designation, it is not necessary that the users of those products have to move away from them. Further, there is no intention to offer quality definition of lubricants with this scale. That a product has an ISO VG number associated with it has no bearing on its performance characteristics.

The ISO designation has been under development since 1975. The most recent release in 1992 (ISO 3448) contains 20 gradients. This covers nearly every type of application that the lubricant practitioner can expect to encounter. The lubricant manufacturing community has accepted the recommended ISO gradients and has devoted appreciable effort and energy to conform to the new grading approach with old and new products.

It is unlikely that all of us who learned about the use of oil from our mentors or friends under the hood of a car will ever abandon the SAE grading system. We don’t have to. At least for automotive oils, we can expect to continue to see the 10- 20- 30- 40- 50- values used. It is likely, however, that in the industrial lubrication world there will be more ISO dependence in the future.