Be Alert to Heat as Both a Contaminant and a Symptom 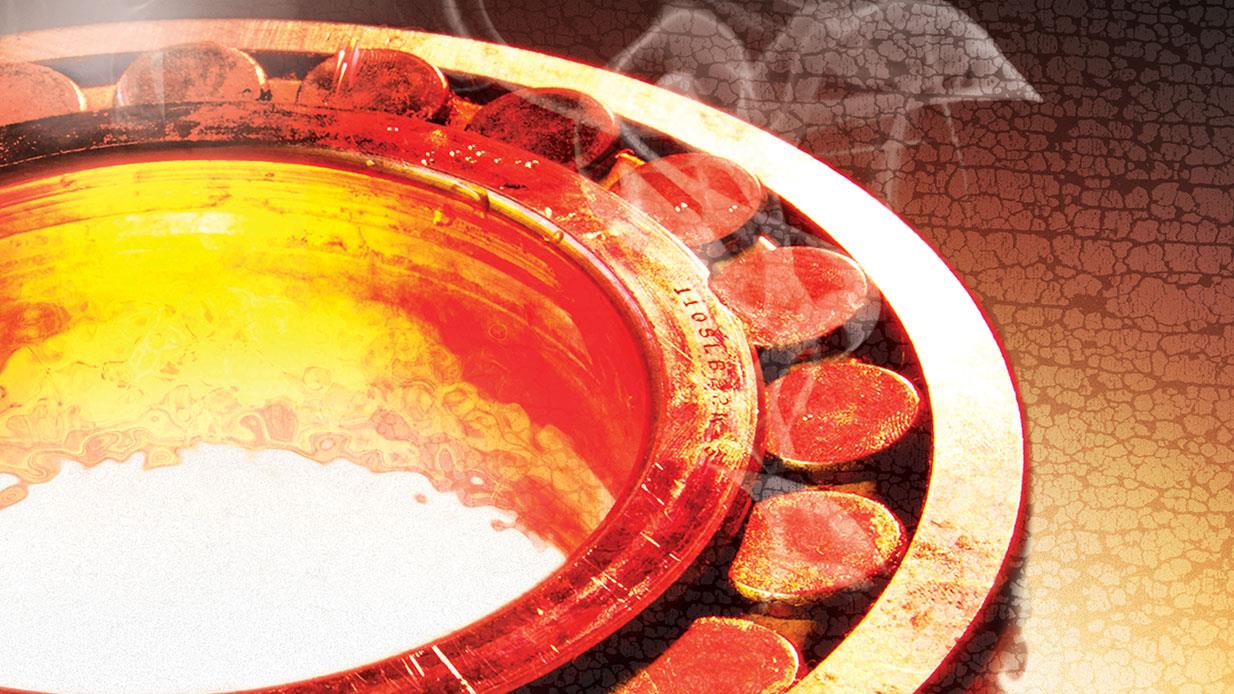 Excessive heat is a severe contaminant. It wreaks havoc on oil (chemically and physically) and retards lubricant performance by increasing wear, corrosion and friction. Friction and wear cause more heat, which sends the machine into a cycle of despair.

Heat must be controlled within the machine’s operating limits. This varies considerably between machine types and applications. Lubricants have their own unique limits as well.

Attempting to solve heat problems by simply adding a cooler or enlarging the cooler just masks the symptom and prolongs the solution. Abnormal heat is a telegraphed S.O.S. call that commands attention and remediation.

Critical temperatures on most high-speed and high-value machines are monitored in real time, often at multiple points, such as guide and thrust bearings (typically imbedded thermal couples). A common example of bearing temperature monitoring is shown in Figure 1.

Here, a temperature excursion was noticed first before any other symptoms. After inspection, a lubrication issue (cake-lock) was found to be the root cause.

The cake-lock issue was solved by converting to a softer grease and a faster delivery rate. Had the bearing lubrication been more closely monitored by an inspector, i.e., noticing that the drip pan had only oil (not grease), the trip could have been avoided.

Figure 1. The No. 2 generator bearing experienced lubricant starvation due to grease cake-lock conditions within the housing. The slinger ring failed because of the cake backup, which led to impaired bearing lubrication and tripped the turbine. How was this observed by inspection? Grease was going into the bearing by an auto-luber. However, on the other side of the bearing, only oil was coming out and filling the drip pan. The thickener was logjammed in the bearing, and the oil was pressed through the porous cake (thickener) like a filter press. The bearing temperature rose from 65 degrees C to more than 100 degrees C when it tripped.

Temperature monitoring is a fundamental condition monitoring principle and one of the earliest forms of instrument-based condition monitoring. It is nearly impossible to have a serious or advanced lubrication problem and/or machine component failure without heat being involved as a root cause or symptom.

Whether you’re using a heat gun, infrared camera or thermal couple/resistance temperature detector (RTD) to monitor heat in real time, you should have a game plan. For lubricants, the use of thermal lubrication charts (TLCs) or something similar makes a lot of sense.

There should be a normal working range (green), cautionary zones (yellow and amber), and red (hot and cold) for life-threatening (catastrophic failure) issues.

Develop a thermal lubrication chart (TLC) for critical equipment, especially bad actors (as shown above). Define the points (A-F) for a specific location on the machine to be monitored (e.g., a supply line).

Sustained operation in zones 2 and/or 4 lowers the service life of the machine and/or lubricant. For instance, operating in zone 2 may retard lubricant flow to the bearings, raise energy consumption and increase the foaming tendency. Operation in zone 4 may accelerate oil oxidation, reduce film strength and increase wear associated with particles.

An increase in electric-motor temperature of 10 degrees C will cut motor life in half. Motor bearings typically should run less than 160 degrees F (71 degrees C). Often, hot-running motor bearings are associated with overgreasing. Conditions that might be observed include the following: However, this internal bearing temperature may be 30-50 degrees F hotter, as influenced by ambient cooling conditions, lubricant circulation, metallurgy, bearing configuration and heat generation factors (such as grease churning and/or high mechanical friction).

For rolling-element bearings running at temperatures higher than 70 degrees C, cut the bearing life by 1.5 (i.e., divide by 1.5) for each increment of 10 degrees C above 70 degrees C.

For circulating oil, there should not be a difference of more than 50 degrees F between the oil going in and coming out of the bearing.