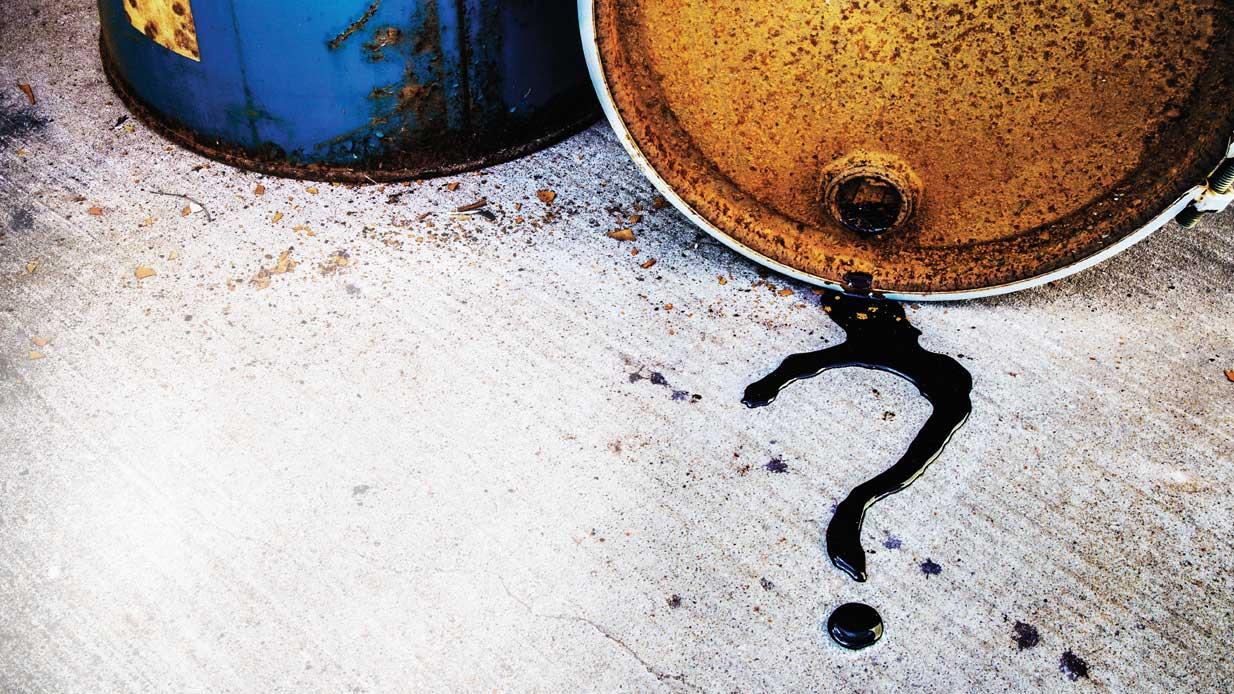 Oxidation could be described as the degradation of good oil gone bad. What was once a stable lubricant is now just sludge and varnish causing havoc in your equipment’s system. How does this happen?

What was true when your mother said hanging around the wrong crowd was bad is also true with your lubricants. A bad environment can have devastating effects on the quality and life of a lubricant. To keep your lubricant in optimum condition, the bad environment must be identified and steps taken to prevent its destruction.

Lubricants are vulnerable to attack. Most non-synthetic lubricants are comprised of two components: mineral oil and additives. The oil is a group of molecules made of hydrogen and carbon atoms.

These atoms have a positive attraction for each other, connecting by a method called bonding. If the right amount of hydrogen and carbon is available, the molecules are said to be saturated. This means they are stable and will not attempt to react with other potentially bad elements.

The problem arises when some hydrogen atoms are not present. The molecule becomes unsaturated and is quite reactive. This can be the beginning of the end for the lubricating oil.

The bad environment comes from an unlikely source: oxygen. Oxygen is the third most abundant element on earth. It is in the air you breathe and the water you drink as well as countless other substances. Oxygen as an element is actually two atoms which bond together and generally are not a major source of problems.

If, however these atoms separate, they go looking for another element to bond with and produce a reaction. This separation of the oxygen element is caused by an increase in energy. The separated oxygen atom encounters an unsaturated hydrocarbon, they bond, and the reaction is devastating. Acids are created which attack the oil, resulting in oxidation. Air is the major source of oxygen needed to make the good oil turn bad.

The energy needed to separate the oxygen atoms, and to some extent the hydrocarbons, comes in the form of heat. Heat can originate from a myriad of sources, including the mechanical process, the external environment, friction, etc.

For the oxygen element to separate, only a small amount of energy is required (approximately 495 kilojoules). This is equivalent to 120 calories, which is about the same amount as a half slice of birthday cake. Hydrocarbons are a bit worse and require less energy. Any increase in heat creates a volatile environment, adding to the potential of oxidation and varnish formation. Other environments may also affect the life of a lubricant. For instance, water can impede lubricant life. However, this generally is accomplished by degrading additives that attempt to deter oxidation. Water requires a lot of energy to break apart, so oxygen availability is limited. In addition, metals can react with mineral oils, causing sludge. Process fluids may be damaging as well. Process acids can lead to major destruction. Ultraviolet light is another source of energy that can result in oil degradation.

Preventing the lubricant from a life of oxidation requires minimizing the availability of air and controlling heat. It is important to remember that heat alone will not lead to oxidation. It can only expedite the reaction process between two unstable elements. Since heat reduction or control may be difficult to achieve, controlling air availability is a better option. Following are some actions to better control air and heat in your systems.

In circulating lubrication systems, ensure the fittings and connections are tight. Air can be sucked into the lubricant through loose connections. Once inside, there is plenty of agitation to allow the oxygen and hydrocarbons to react. Also, keep your bearing seals in good shape. Air can infiltrate through defective seals, enabling the oxygen and hydrocarbons to react and form oxidation products.

On reservoir systems, maintain a positive pressure. Using an inert gas such as nitrogen prevents air from entering the system. Finally, consider oil mist. Although oil mist is mostly air, the temperatures are low enough to prevent the oxygen atoms from separating. It also provides positive pressure to keep external contaminants at a minimum.

Always use the correct viscosity grade. Low-viscosity lubricants allow metal-to-metal contact, which generates friction and results in excess energy from the heat produced. A high viscosity can cause internal friction and lead to similar problems. Your lubricant and equipment manufacturer can help you determine the right viscosity for your application.

Equipment vibration should also be kept at a minimum. Excess vibration can occur for a multitude of reasons and cause increased metal-to-metal contact and heat. Additionally, try to restrict external heat where possible. Use fin fans or covers to inhibit the heat absorbed from the environment. Consider adding coolers to reduce heat buildup in the lubricant.

How do you keep a good oil from turning bad? Analyze your lubricant systems, looking for air-entry avenues. Remove these points of entry wherever possible. Find the sources of heat and engineer methods to reduce or control that energy.

Lubricants can have long lives free of oxidation. Equipment optimized in this manner will provide high production rates and minimal downtime. Just stay away from those bad environments.