Are you getting bearing lubrication right?

Determining when to lubricate bearings and how much lubrication to apply are two of the perplexing issues facing technicians responsible for maintaining bearings. Underlubrication can cause a bearing to wear out before its time. Applying too much lubrication often can lead to catastrophic results to the bearing or long-term damage to motor coils and windings.

Traditionally, lubrication scheduling has been time-based. Equipment suppliers often recommend lubrication schedules based on hours of operation. In addition, they frequently provide instructions on the amount of lubricant to be applied during these scheduled maintenance procedures. It is common for clients to be told to lubricate at short-term intervals and to add what appears to be excessive amounts of grease.

In one instance, a client was advised to lubricate motor bearings every two to three weeks and to add one ounce of grease. The origin of these suggestions leads one to speculate that they are often based on some unknown factors that have no real-world application.

Lubrication intervals are based on a simple premise: keep equipment running optimally by preventing a bearing from running dry and causing catastrophic damage. It is a solid preventive concept. However, there is a balance that must be struck between preventing lubrication starvation and gross overlubrication.

To accomplish the goal of equipment optimization, it is best to know when to lubricate and when to cease applying lubricants to a bearing. This can be accomplished with a condition-based lubrication strategy. Simply put, the condition of the bearing determines when to lubricate. If a bearing is working properly and does not demonstrate any changes that warrant adding lubrication, the bearing should be left alone.

Should conditions change and a bearing demonstrate a need for lubrication, then a lubricant should be applied. Monitoring the bearing as the lubricant is applied will also help determine how much to add and when to stop the application. 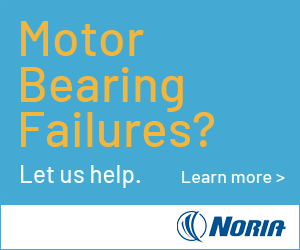 The technology is based on the sensing of high-frequency sounds. Ultrasound starts at 20,000 cycles per second, or 20 kilohertz (kHz). This is considered the high-frequency threshold at which human hearing stops. Most ultrasonic instruments will sense from 20 kHz up to 100 kHz. The range of human hearing covers frequencies from 20 cycles per second (20 Hz) up to 20 kHz. The average human will often hear up to 16.5 kHz and no more.

Instruments based on the technology of airborne/structure-borne ultrasound are referred to as ultrasonic translators. They receive the inaudible high-frequency sounds and electronically translate them into the audible range through a process called heterodyning. The heterodyning method works in a similar fashion to an AM radio.

While we cannot hear radio waves, this method helps us easily identify different voices and musical instruments when we listen to the radio. Similarly, this heterodyning process provides an accurate translation of ultrasound produced by operating equipment and enables users to readily identify one sound component from another.

Most ultrasonic translators provide feedback in two ways: through headphones and on a meter where the amplitude of these sounds can be viewed as intensity increments or as decibels (dB).

Imagine a properly installed bearing. It has been given the right amount of lubricant and is in perfect alignment. As it rolls around the raceway, any stress it may have is evened out by the lubricant, and it moves stress-free.

As it does, it produces a recognizable rushing sound akin to the sound of air leaking out of a tire. This rushing sound is referred to as “white noise.” It includes all sounds, both low and high frequencies. The high-frequency waves generated by this white noise are more localized than those of the lower frequencies. Using an ultrasonic translator, these signals can be detected with little or no interference from other mechanical noises generated by other components, such as a shaft or another bearing close by. (As opposed to vibration meters, which detect vibratory displacements of rolling elements, the ultrasound translator will detect friction.)

As the lubrication level in a bearing falls or deteriorates, the potential for friction increases. There will be a corresponding rise in the ultrasound amplitude level that can be noted and heard. The method to determine when to lubricate and when to stop applying lubrication with ultrasound instruments is as simple as setting a base line, setting inspection schedules and monitoring as during lubrication applications.

A baseline for a bearing reflects the decibel level at normal operating conditions with no observable defects and with adequate lubrication. There are three methods for setting a baseline:

Equipment criticality, as it relates to production, environmental and operational consequences, is the primary factor in selecting and setting frequencies for assessing mechanical systems. After the baseline inspection has been performed, a monthly interval should be sufficient. For bearings with high decibel levels that have been subsequently lubricated, it might be necessary to test more frequently to note any possible changes. If a bearing is in a failure mode, the lubricant will temporarily mask the fault. However, the fault will quickly produce a rise in the dB level. In some instances this will happen in minutes, in others, days.

Monitoring as You Lubricate

A bearing that exceeds eight dB over a set baseline can be presumed to need lubrication. Once a bearing has been identified for lubrication, knowing when to stop applying the lubricant will prevent overlubrication. This is accomplished in one of three ways:

Ultrasonic inspection and monitoring is the most reliable method for detecting incipient (the very beginning of) bearing failure. The ultrasonic warning appears prior to a rise in temperature or an increase in low-frequency vibration levels. This method of inspecting bearings is useful in recognizing the beginning of fatigue failure, brinelling of bearing surfaces, and an excess or lack of lubricant.

In ball bearings, as the metal in the raceway, roller or ball bearing begins to fatigue, a subtle deformation begins to occur. This condition will produce irregular surfaces, which will cause an increase in the emission of ultrasonic sound waves. A change in amplitude from the original reading is an indication of one of two conditions: prefailure or lack of lubrication and incipient bearing failure.

An eight dB increase over baseline accompanied by a constant rushing noise suggests lubricant failure (dry bearing surfaces). When an ultrasonic reading exceeds any previous reading by 12 dB accompanied by crackling noises, it can be assumed that the bearing has entered the beginning of the failure mode.

This information was originally discovered through experimentation performed by NASA on ball bearings.1 In tests performed while monitoring bearings at frequencies from 24 through 50 kHz, researchers found that the changes in amplitude indicated incipient failure before any other indicators including heat and vibration changes.

An ultrasonic system based on detection and analysis of modulations of bearing resonance frequencies provides subtle detection capabilities, whereas conventional methods are incapable of detecting slight faults.

As a ball passes over a pit or fault in the race surface, it produces an impact. A structural resonance of one of the bearing components vibrates or rings by this repetitive impact. The sound produced is heard as a qualitative change in the headphones, usually as a crackling sound and observed as an increase in amplitude in the monitored ultrasonic frequencies of the bearing.

It is imperative to consider two elements of potential failure: lack of lubrication and overlubrication.

Normal bearing loads cause an elastic deformation of the elements in the contact area providing a smooth elliptical distribution. But bearing surfaces are not perfectly smooth. For this reason, the actual stress distribution in the contact area will be affected by a random surface roughness. In the presence of a lubricant film on a bearing surface, there is a dampening effect on the stress distribution, and the acoustic energy produced will be low.

Should lubrication be reduced to a point where the stress distribution is no longer present, the normal rough spots will make contact with the face surfaces and increase the acoustic energy. These normal microscopic deformities will begin to produce wear and the possibilities of small fissures may develop, contributing to the prefailure condition. Therefore, aside from normal wear, the fatigue or service life of a bearing is strongly influenced by the relative film thickness provided by an appropriate lubricant.

The appropriate amount of lubrication is important. If a bearing is overlubricated, the bearing element or cage can be pushed (pressed) excessively by the lubricant causing additional wear of the bearing. Too much lubricant causes churning and fluid friction. The heat from the fluid friction, coupled with the squeezing effect of churning, serves to drive the oil of the thickener prematurely, the oil dissipates through the seals and into the housing, and is lost.

On the other hand, if there is not enough lubricant, the bearing will rub on the solid surface, again causing friction and wear on the bearings. Either case is detrimental to the life of the bearing. Using airborne/structure-borne ultrasound takes the guesswork out of lubrication.

As with any technology, there is no one-size-fits-all application procedure. For example, there are some limitations of estimated regrease intervals/volumes using standard equations. One of the problems with time-interval lubrications is that there are different applications for different bearings, which vary among facilities.

For example, a food-processing plant may use an application in which machinery is steamed down every day for cleaning. Another facility might not follow the same procedure because it may operate in a different environment that does not require cleaning as frequently, while another might have many airborne particulates that could contaminate the bearing. Because of this kind of variability, one can only guess what the lubrication cycle should be. It depends on what a facility is producing and under what situations the machinery is operating.

Additionally, there are some considerations regarding where, when and how an ultrasonic approach can be used. For example, if a facility approaches lubrication haphazardly, in a disorganized fashion, or relies solely on sound quality as a determining factor, the effectiveness of the program can be compromised. One needs to track bearing condition over time, setting baseline levels and determining dB changes over that baseline to indicate the need to lubricate or not. Such a program helps personnel understand exactly what they are looking at.

The waveguide can be isolated from structure-borne noise of the machine (the mounting point) via rubber isolation material.

About the Author
Mark Goodman

Mark Goodman is the vice president of engineering at UE Systems Inc. For more information on this subject, visit www.uesystems.com or call UE Systems at 8...